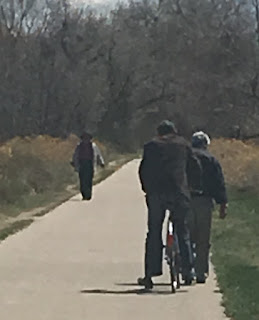 While taking a stroll with my husband, Alan, another disturbing experience on the Highland Canal bike path occurred. A man clearly out of place had stopped on his bike next to a group of little girls who were playing at a park just1000 feet from the path. He stared at these children with intensity like he was watching a porn flick. It was so disturbing I asked Alan to stop so we could keep the girls safe. We pretended to enjoy the scenery just to keep our eye on him because after my last blog about a suspicious character on the path, a teenager was assaulted a mere 9 days later. At the time, we couldn’t do anything about the guy because he was only looking suspicious. My heart fell when I heard the news and I began to weep as I talked to the crime stoppers’ hotline. This unfortunate assault could have been prevented. I then emailed my blog article to Channel 7 news as soon as I learned the teenage girl was assaulted but neither the police nor the news contacted me for further information.

Therefore, witnessing another potential crime in the same general area as the teenager’s assault, we decided to be the Path Patrol in order to prevent these three little girls or anyone else for that matter from being hurt. We approached the kids and pointed the man out hoping he would see we were talking about him yet he continued staring. He moved his bike in two-feet increments then turned back to stare at them. Eventually he noticed our presence and moved forward about 100 feet to see if we’d moved on. We decided to stay behind him and watch him. He started hiding his face as it became clear we were following him. Soon another strange man joined him on the path and we simply watched them. The older man started scouting out different avenues they could take. He pointed out an area on the Cherry Creek path as though they were recalculating their next move and resorting to Plan B. The older guy soon realized we were suspicious and pretended he didn’t know where he was by asking us which path led to Parker Road. I deliberately pointed in the opposite direction that would have kept him on the Highland Canal path because we witnessed him instructing his partner to go on Cherry Creek. He looked confuses and froze seemingly not knowing what to do when he was misdirected. I think he anticipated we’d tell him to go in the direction he instructed his friend to follow. His friend had gone ahead on the Cherry Creek Path and had stopped to wait on him—watching us. Alan and I decided to go in the direction of his friend and the old man just stood there seemingly perplexed. We followed the younger man on the bike for about 30 minutes because the guy would only move a foot or two waiting for his partner who we must of spooked off because the guy never caught up to him. We warned a mother of three to stick close together as they passed the guy on the bike. I looked at the man and gesture in a manner that would suggest we were talking about him and then the mother took my lead and scoped him out. We did this to show him silently we were watching him—hoping to thwart any possible attack. Alan and I watched her pass the man and then we went to a nearby bridge and watched him for about 10 more minutes. The path was finally beginning to fill up with other bicyclists and runners, so we decided we could stop standing guard and finish our walk.

Were these two men simply exploring nature or were they looking for prey? My guess is the latter because their attire didn’t look appropriate for the path. They kept meeting up at different places as to not be too obvious and the one would not show his face. One might think that the older guy was just an old man out for a stroll but his bizarre behavior suggested otherwise.

This is the third “alleged” crime we’ve witnessed in the last month and I am disturbed by the lack of response I’ve gotten. Our children are being stalked, assaulted, raped and murdered and the unsettling feeling these guys created for us made us believe they were looking around for their next victim. I am forwarding a picture of the two men in an effort to protect others but not to assume these two were anything but weird (hopefully). In this country we are innocent until proven guilty but there isn’t any reason why we cannot be aware of the dangers out there. It’s better to be safe than sorry.
Posted by Christina M. Dalpiaz at 7:16 AM No comments:

Today while taking a pleasant walk on our bike path, my husband, Alan, and I decided to check out the new parking area that opened up to the public. As we made our way down to the beautiful new area we became instantly uncomfortable when a suspicious-acting man was standing outside his car stretching. Normally, one might say that’s what you do right before a run but what stuck out was the man had his car running with the driver’s door open as though he was planning a quick get away.  I deliberately acknowledged him by saying good morning to let him know I got a saw him; he looked away and returned a salute in a mumbled voice as though he was trying to avoid any further contact or perhaps identification. In my work I have interviewed and counseled many men who have been less than kind to women. I have also had the personal experience of being helplessly stalked for 2-years by a stranger. My encounters with them have taught me how to have my radar up when I see situations like this one—he was out of place and his body language suggested he might be disturbed or at a minimum deeply troubled.

After Alan and I finished reading the trail maps, we decided to start back up to the path at the exact same time a young lady started trekking up the hill. The man stretching and bending seemed defeated and immediately retreated to his car. He drove off once we topped the hill. The event was unnerving because his demeanor and behavior seemed highly suspicious and his exit out of the parking lot once the woman made it up the path felt more than coincidental. I would have liked to believe he was heating up the car before his journey home but it was 60 degrees out plus his trip to the parking lot should have taken care of any warm ups the car might have needed; I would have like to believe he was simply stretching after a run but his clothes did not suggest he was jogging; he didn’t appear as though he’d sweating or even remotely tired after a cardiovascular workout. What his disposition led me to believe however is that there was a predator on the loose and he was preparing to do a grab and go. Every fiber in my being was activated: Everything felt wrong, yet no crime was committed. Did our presence thwart an attack? Has this man been carefully stalking this young lady? We might never know but what I will say to women out there is keep a safe distance between a running car and an open door. Alan and I pondered that it would have only taken mere seconds to kidnap her—seconds. Be safe and diligent as not everyone out there on your journey has your best interest at heart.
Posted by Christina M. Dalpiaz at 4:30 AM No comments: